Cloudflare faced an issue with long latencies for DNS responses in certain parts of the world. In addition DNS over TLS is also a factor. They use Unbound as a DNS resolver. For a better failover, they set 30 seconds TTL for such responses.

There are two options to solve this problem. The first is prefetching. This means that on each request TTL is checked. If it’s less than 10%, then a background task prefetches this record for the next request. This approach doesn’t work well for short TTLs or rare requests.

Another option is stale cache. In this case, an expired record is returned to the client while a background job tries to get the updated result for the future request. This improves latency results significantly.

Cloudflare tried stale cache option back in 2017 but Unbound support for this feature was limited at the time. New versions of Unbound provide more options to configure, so Cloudflare team explores different parameters in this article to make sure this time it satisfies their need. This time all tests cases worked perfectly, so Cloudflare rolled this out to production. Resulting graphs with dramatic changes are provided in the article.

Capital One: Moving to DynamoDB to Increase Application Resiliency

Aurora Global Database was almost perfect solution with one minute failover but at the time it only supported MySQL (since their decision was made, it also supports PostgreSQL). Aurora Multi Master supports multiple primary database but only within a single region. DynamoDB is multi-region active-active, requires no failover but it’s a NoSQL which means a lot of changes in the application.

The decision was made in favor of DynamoDB as it’s a single active-active multi-region solution. The replication time in most cases is around 1 second. Migrating application turned out not as hard as expected with a few interesting findings, like absence of NULL or blank values, and no datatype for date and time. They converted datetime values into ISO UTC. For NULL values they created a NULL structure.

As a first step of migration, application read/write were directed to both PostgreSQL and DynamoDB but results were only returned from PostgreSQL. After several weeks with no errors in production they turned off PostgreSQL. 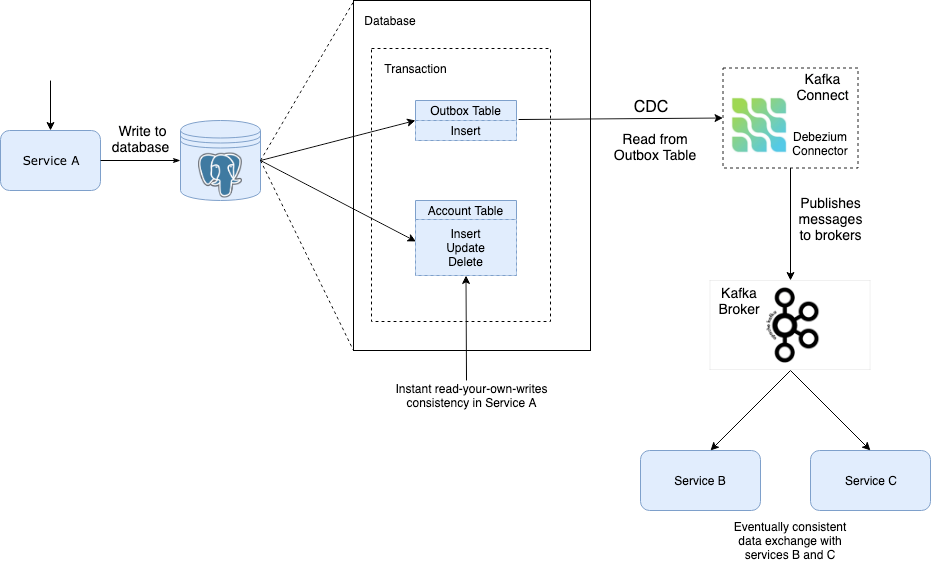 Let’s imagine an event based architecture where database write and Kafka event should happen as one transaction. In case of DB write fail, Kafka message will be sent anyway. In case of Kafka fail, data was persisted in the DB but further pipeline with Kafka would not work.We should make both components interdependent. If we write to Kafka first, we lose “read your own write” ability.

Here comes an Outbox pattern. We write our data to DB, and we also write an event-like record to a special outbox table in the DB in one transaction. A separate process is responsible of getting updates from the outbox table and delivering them to Kafka.

Frontend at Lyft: An Overview

Besides the actual app, Lyft frontend team is also responsible for other internal and external frontend related parts, for example web portal, affilliate sites, Hertz integration, etc. Historically, one monolith Angular application worked with numerous backend microservices. Paradigm then shifted to one frontend application for one backend service, although ratio is not always 1:1. Lyft migrated from Angular to React, from Express to Next. They also heavily rely on Typescript.

Frontend engineers are vertically oriented, meaning that there is no Frontend department. Each team that develops a certain service has one or several frontend engineers. Consequently, such engineers request a code review from their colleagues at other teams.

This article is an introduction into deep learning. It explains strengths and use cases for different frameworks while also telling a story of their development. Main focus is on TensorFlow, Keras, and PyTorch. It also explains that Keras isn’t really a framework, rather a library API for other backend frameworks that do the heavylifting, mostly shifting its support to TensorFlow now.

How OLX Europe Fights Millions of Bots with AWS

ConsoleMe: A Central Control Plane for AWS Permissions and Access